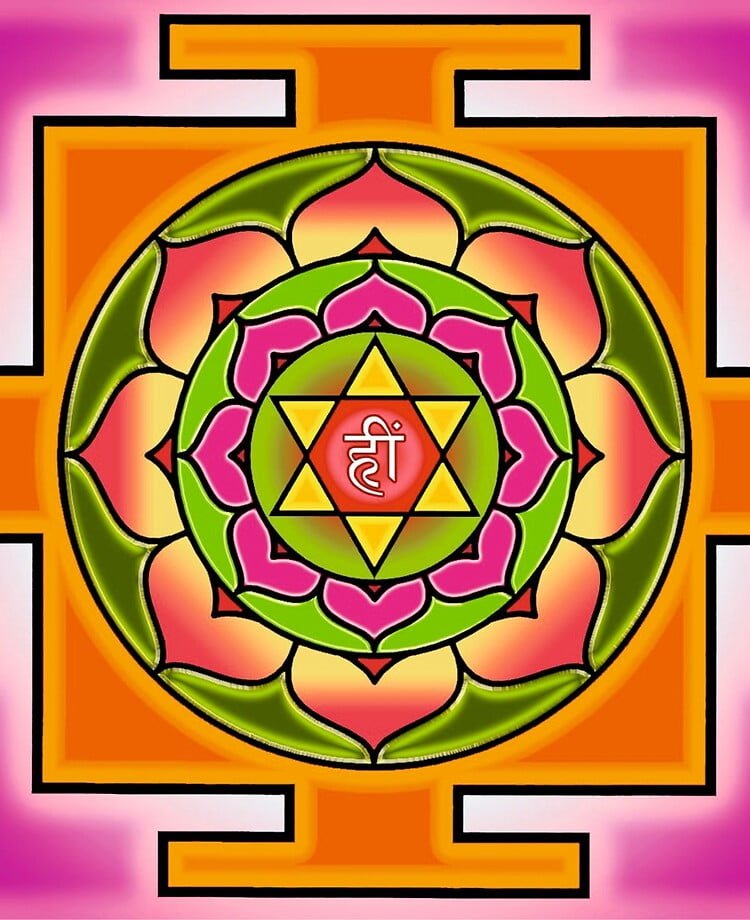 Bhuvaneshwari is the fourth great divine power, symbolizing the power or energy of space, whose body is the very Space or The Cosmos.

It is another way of loving transformation and the Spiritual Path – how we transcend the apparent dependence of being in a space and necessarily having a body (or more).

Anuttara fundamental meditation is a way of moving from ignorance to knowledge, from addiction to freedom through the transcendence of space.

She is known as the Divine Cosmic Mother, Adi Parashaki or Parvati - one of the first forms of Shakti, Shiva's counterpart.

It is described as particularly beautiful. Its outer beauty being a natural expression of its inner universe.

Bhuvaneshwari's beauty is illustrated in Sir John Woodroffe's "Hymns to the Goddess Bhuvaneshwari":

"Oh, you, great goddess, whose face fascinates me. Your body is moistened with divine nectar (soma) flowing from Sahasrarapadma. You are charming, with round breasts and enviable waist; in your hands is a rosary, a pitcher and a book, and with the fourth hand you realize the Jnanamudra gesture. You, you're like Lakshmi rivaling the sensuality of molten gold. In two other hands you have two lotus and with the other two you make the gestures of granting spiritual gifts and the removal of fear (Varana mudra and Abhaya mudra)".

"O Mother, your two arms are moistened with water, dripping on your body. Again and again I look at your empty shapes, which conquer through beauty and fullness and are adorned with a pleasant necklace and many other jewels. I can't get enough of looking at you. I often remember your face, with big round eyes and wonderful eyebrows, with a radios smile, a straight nose and red lips like Bimba fruits. Anyone who contemplates the richness of your hair in the glow of the moon and resembles a swarm of black bees spinning above the fragrant flowers is free of all bonds and will never be born again in this world. The mortal who reads these delightful hymns with all his heart will obtain all the riches, defending You, the Great Goddess, in the form of Lakshmi whose feet prostrate the kings themselves."

In the famous treatise "Tantrastara" is described as a woman with a beautiful face, ringed black hair and a smile full of goodwill. His eyes are clear and warm. Her red lips are full, and her nose is delicate. His firm breasts are anointed with sandalwood paste and saffron. His waist is narrow, his thighs, buttocks and navel are delightful. His gorgeous neck is decorated with jewels, and his arms are made for hug.

In the hymns her worshipped in the treaty "Shaktapramoda" is described as a beautiful young girl who smiles mysteriously and whose yoni (female sexual organ) is charming.

It is said that its symbol is the triangle (the schematic representation of the yoni).

Here she is described as having four arms, with two of them making the gestures of granting grace and that of removing fear, respectively. These gestures express his benevolent attitude to the whole world and in particular to devoted disciples. In the other two hands she holds a stake and a stake. Divine Mother Bhuvaneshwari uses the noose to control the worshiper whose energy is uncontrollable and the stake to discipline the aspirant, thus helping him achieve spiritual enlightenment and giving him His Grace.

Bhuvaneshwari is the color of the sun at sunrise, with crescent moon on the crest, four hands and three eyes. In two of her hands she holds a stake and a stake, and with the other two hands she makes the gesture of removing fear (abhaya mudra) and the gesture of offering wonderful spiritual gifts (varana mudra). Sometimes she is depicted holding in two of her hands a lotus and a jewelry vessel, and other times her left leg is depicted as being seated on a jewelry vessel. Bhuvaneshwari is placed on a bed similar to a throne, which consists of the representation of the five forms of manifestation of Shiva (as described in the case of the Great Divine Power Tripura Sundari) and from which she controls and organizes the movement throughout the Universe.

Other times Bhuvaneshwari is depicted holding a fruit in the first hand and with the second hand makes the gesture of providing protection (raksha). It is also described as golden, red or blue, each of these colors signifying the three Gunas.

Another description of her shows her having 20 arms in which she holds various objects, for example: bow with arrows, a pair of scissors, a sword, a stake, a bat, a disc, a trident, a chain and a staff, a clam and a garland of flowers and making the protective gesture of chasing fear (abhaya mudra). In two other hands she holds a red lotus flower and a box with precious jewels. She is seated naked on a red lotus flower in the middle of a lake full of lotus.

It is said that before Bhuvaneshwari appeared in the manifestation there was only the Sun, the Creator of the entire Universe, who was the master of heaven. He was revered and adored by all beings.

The wise men (rishis) begged the great Sun (Surya) to create more worlds, offering it as an offering soma, a sacred plant (or divine nectar). Surya then used his Supreme Energy to manifest the worlds (lokas or bhuvanas). Thus, this Supreme Energy took its own form in the full appearance of the splendor of the Great Divine Power Bhuvaneshvari, the Governor of all worlds or the Master of the Three Worlds: Bhur, Bhuvar and Svar (the earth or the physical plane, the astral atmosphere or plane and the heaven lysing sky or the heavenly plane). It is also said that this form of Supreme Energy Shakti was unmanifested until the moment of creation, which is why Bhuvaneshwari is associated in the yogic tradition with the visible, manifested world.

It is the light itself, the primordial queen, the space. It is infinite and ineffable - the origin of everything that exists.

For this reason, she is considered the mother of the Sun and all solar deities.

It is pure consciousness, original space, the foundation of any subsequent manifestation.. It is the vacuum from which all creation appears.

Being the source of all that exists, it represents the ineffable expression of endless freedom and happiness.

Space or akasha is the primordial "matter" from which the 5 elements arise: air, water, fire and earth, which form the basis of the physical world. From this primordial space spring several levels of manifestation, depending on the various vibration frequencies of subtle energies.

It is known as Maya- The Great Universal Illusion

It creates the universe we live in. Here the limited, ignorant beings lie in the samsaric wheel, in the cycle of birth and death, in the illusion that they are bound edithe and separated from the divinity, but also from all that exists.

It is the very consciousness in which all beings and objects manifest themselves, in which all events take place.

When we come to realize that there is only one consciousness that manifests the divine-Lila game, of which we are a part, we break the illusion that we are limited, separated from the divinity. We feel one with everything that exists, unlimited and happy.

Because it represents space, Bhuvaneshwari is complementary to Kali

The significance of these aspects is that all events represent nothing but simple "sequences" in the gigantic field of consciousness of the Divine Mother Kali (who manifests time), and all localizations in space are merely the resonance "phases" of the cosmic "dance" of the Divine Mother Bhuvaneshwari, which manifests space.

It is love that puts an end to attachments and sufferings, knowing true unconditional and unlimited love.

Bhuvaneshwari is the space in which God's endless will and love manifests itself.

It helps us transcend any limitation.

It is the supreme peace, the rest, the tranquility, the unmanifested, undifferentiated world

It is the untiliated space, in any limitation is exceeded.

By referring to it we can amplify in our being the attributes that we find in it.

For this we have a number of practices of adoration of it:

~fundamental meditation, which is a mediation of space transcendence.

~jnanayoga- yoga discrimination- to discern between illusion and truth.

We come to know the truth, which is that at the essential level we are one and the same being.

~working with the mantra