Dhumavati The great divine power of the mental vacuum - shunyata

The mental void means nothing but the absence of any thought and any disturbance, however fine.

The mental void does not mean stupidity or mental blockage but much higher capacity than the thought, which obeys it anyway, and through which we can access Truth, Freedom, Life and Happiness.

Dhumavati is the seventh great divine power of the 12 Maha Vidya and is symbolically represented by a goddess - a special and very old woman who is either in a state of detachment and rejection of what is external or, when correctly represented, in a transcendent ecstatic state.

It is very old because it symbolizes the fact that the mental vacuum is transcendent, i.e. it is beyond any immanence, but, very importantly, this woman is happy because of the infinite divine ecstasy in duration and depth that she lives and what is the nature of the mental vacuum, shunyata.

Starting from the etymology of the word "dhuma",which means "smoke", Dhumavati is "the one that is made up of smoke" or "the one like smoke".

As a result, her name expresses her ability to cover with a veil the external reality, common, superficial, so that we turn our attention to ourselves, to Ourselves. It helps us to focus on our depths, to what is still unmanifested, transcendent.

It distracts us from Samsara (the manifested world in which we live) and directs us to our eternal, immutable, ineffable essence, that is, the Supreme Atman Self.

Meaning of its representation

She has a slightly appealing representation, like an elderly but happy woman, apparently devoid of femininity.

This representation signifies her state of perfect detachment from the outside world, from the Maya illusion, and her orientation to God.

It frees us from attachment and reveals the true spiritual reality.

It helps us learn our lessons and develop spiritual virtues, such as: detachment, patience, perseverance, forgiveness.

It is the image of a widowed woman, which signifies a state in which the feminine principle does not need its masculine counterparty – the aspect of consciousness on the outside, because it permanently lives communion with the Supreme Transcendence in Itself.

This is a representation of transcendent energy, which contains all the possibilities of manifestation, but is not involved in the process of creation. It can bring us grace in order to become aware of these latent, unmanifested energies, which, once conscious, we will be able to manifest easily.

She is shown in a carriage.

In his left hand he holds a sieve, which signifies the ability to discern between illusion and truth, and with his right hand he makes the gesture that signifies knowledge (chinmudra).

In other representations hold in one hand a bowl of fire and a basket in the other hand.

The fire symbolizes the lightning transformation by direct calcination of impurities and limitations.

The basket, used to separate wheat from the pleave, represents the ability to discriminate between illusion and truth.

Her carriage is the spiritual vehicle that is the shunyata mental vacuum that leads us effortlessly to realization.

Dhumavati gives us the opportunity to orient ourselves towards the inerrior, towards the Self, which leads us to spiritual realization.

Its hypostases or attributes

It is the great divine power of emptiness, manifests a lack of passion and sometimes disgust forthe outside world, helps us to penetrate all mental fluctuations, leading us into the state of mental vacuum.

The void is the state in which we transcend any form or identification with what is manifested. But the vacuum does not mean the absence of everything, but on the contrary, it represents the deep spiritual reality that is conscious, is everywhere, is the source of everything that exists. In the state of mental vacuum we transcend the dual state and the identity between the world, us and God, appears.

She is a Great Initiator, a spiritual guide,being considered the oldest and wisest of all Maha Vidya. She has the perfect knowledge, obtained from many difficult life experiences.

By referring to it we can acquire wisdom and knowledge of the mysteries of life and death. It helps us to grow spiritually by assimilating the lessons that life offers us.

It represents "darkness" or "obscurity"- resorption in transcendence that helps us see truth beyond appearances.

As we evolve we realize that true spritual knowledge has nothing to do with our ordinary mind, with the ability to understand, but with coming into contact with the truth through reference to oneself. So we no longer identify with our limited being, with our desires, pleasures, fears, or beliefs, but we detach ourselves from them and connect with the infinity within us, which is omniscient, omnipresent, omnipotent. It helps us to transcend suffering and ignorance in this way.

It makes us more aware of our limited, imperfect, ephemeral condition. And so, being aware of the illusory reality, let us make every effort to transcend it and identify with our true nature, the Supreme Atman Self, unlimited, immutable, infinite, thus knowing the true nondual happiness.

Through communion with her we can easily transcend: suffering, frustration, loneliness, inertia, confusion, pessimism, boredom, disappointment.

We get to be free and know the truth.

It is associated with the Great Night or the terrible night of the coming out of the illusion, which it can transcend and reach the beatific vacuum.

Tools by which we can relate to it

There are several ways we can relate to it, depending on its attributes or hypostases that we want to amplify in ourselves.

Bamalamukhi - the great divine power of fascination
Amrita Devi
Bamalamukhi is the eighth great divine power of the ten Mahavidya. It is a facet of the unique female divine being, which manifests certain characteristic aspects, aspects that we find in ourselves and we want to amplify. We report and work with it to make it easier for us to represent and amplify these qualities […]
Citeste mai mult 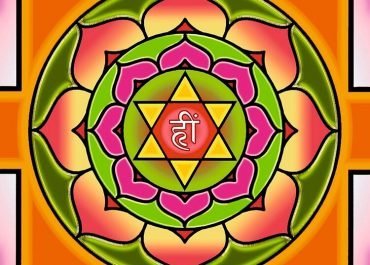 Bhuvaneshwari- the great divine power of space
Amrita Devi
It is pure consciousness, original space, the foundation of any subsequent manifestation. It is the vacuum from which all creation appears.
Citeste mai mult
Matangi - The great divine power of communication and art
Ananda Kali
Matangi is the ninth divine power, which grants us its grace and blessings from its profound state of divine ecstasy that it continually experiences. It instills us to live life in a divine way Matangi is the energy of the spoken word and any kind of external maifestation of inner knowledge, through the various forms […]
Citeste mai mult